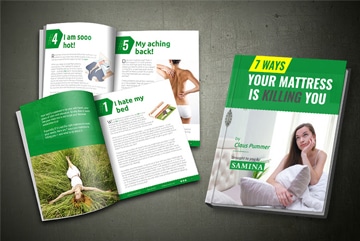 Download Our Free Ebook, 7 Ways Your Mattress Is Killing you, Today!

Learn about how your current mattress is hurting you and why a good nights sleep is so important.

Hand-crafted in the Austrian Alps, SAMINA is the naturally healthy brand of luxury organic mattresses and products promoting optimal health through sleep. The company’s humble beginnings began in Austria where SAMINA was founded in 1989. Dr. Günther W. Amann-Jennson, the company founder and current CEO, designed the organic mattresses and other SAMINA healthy sleep products to improve the quality of peoples’ lives through “better sleep and living healthier, fitter, and more successful lives.”

Natural by Design, Corp., founded by Claus Pummer in 1998 is a lifestyle furnishings company and the exclusive importer of SAMINA products in North America. Hand-crafted in the Austrian Alps, SAMINA is the naturally healthy brand of luxury organic mattresses and products promoting optimal health through sleep. Our delight comes from our customers and offering them a solution for the healthy sleep they have been missing and need now more than ever before. SAMINA healthy sleep advisers can answer questions you have about the products and are trained to understand the essentials of human sleep. Our flagship organic mattress store is located conveniently in sunny Pasadena, California not far from downtown Los Angeles. Call today to speak to a sleep consultant.

Born in Germany, Claus trained as a master carpenter and, in 1998, immigrated to North America. From furniture design and manufacturing, wholesale and retail, he has worked for decades as an entrepreneur. Now, his company focuses on the one item most overlooked yet with the greatest impact on life – your bed. He credits his own good health largely to holistic sleep with SAMINA and has become a holistic sleep evangelist. Having raised two adult children, he now devotes his paternal skills to raising Sol, his beloved black Labrador.

Denise supports Claus as his partner in life and business on a mission to introduce healthy sleep to the sleep deprived. Having had a former career in human resources, she now employs her skills to promoting the benefits of a good night’s sleep. Having raised one adult daughter, she now devotes herself to mothering Claus and their sweet dog, Sol. From personal experience, she also knows the positive changes prioritizing sleep in SAMINA has made on her own wellbeing. Which is why their beloved Sol has her own doggie bed.

John Nelles has been a SAMINA sleeper for 10 years and believes in the product enough he decided to join the company. He has also spent over 35 years as a professional actor, dialect coach, professor, and fight director in the arts; working with many award winning directors, and actors, in film, television, theatre, video games and more. In the winter season, he has been a professional ski instructor since 2004, teaching several different systems and has over 50 years of skiing experience.  He lives in Toronto, Canada with his family.

Brittney joined the SAMINA team in 2019 bringing a unique combination of administrative and creative talents. Willing to do whatever it takes to get the job done along with her cheerful, helpful, positive personality was just what the team needed. She started as Claus’ Executive Assistant and earned a promotion to General Manager having learned every aspect of the business from sales and accounting, international shipping and logistics, customer service and retail store management. Brittney lives in Los Angeles and, in her off-time, is an accomplished singer in a local band and Mom Extraordinaire to her only daughter.

Our healthy sleep concierge service is available Monday – Saturday, 9am – 6pm PST.
Our aim is to reply to you within 24 hours.